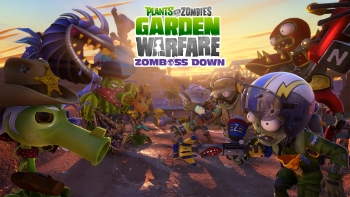 Starting next week, players will be able to spend money on in-game coins to access content more quickly.

EA promised that Plants vs. Zombies: Garden Warfare wouldn't have microtransactions at launch, but never ruled out the possibility of adding them later. Two months after the launch of the first person shooter spin-off, EA has announced that players will be able to purchase in-game coins starting next week. In a post on EA's website, Brian Lindley, PvZ:GW producer, says, "Players will be given the option to purchase coins from the Sticker Shop, which allows players the ability to access new packs and character content more quickly - all the same content that can be earned through regular gameplay. Now you have the choice to play your way; you can play to get new packs and content via earned coins in the game, or you can purchase coins to get more of the packs and content you want right away." Players continue to earn coins by playing the game. The purchasable packs contain random content.

Not all PvZ:GW content is getting the microtransaction treatment. PopCap's console marketing lead Gary Clay confirmed in March that all of the DLC for PvZ:GW will be released for free. Last week, EA released the Zomboss Down DLC for PvZ:GW. Zomboss Down adds a new multiplayer map, Cactus Canyon, and new character variants for each class.

The Escapist's Jim Sterling reviewed PvZ:GW in February, saying, "While there's fun to be had, there's not much meat on the bones, and the repetitive combat ensures this will be nothing but a stopgap title until better shooters enter the market." Plants vs. Zombies: Garden Warfare is available on Xbox 360 and Xbox One, and a PC release is planned for spring 2014.