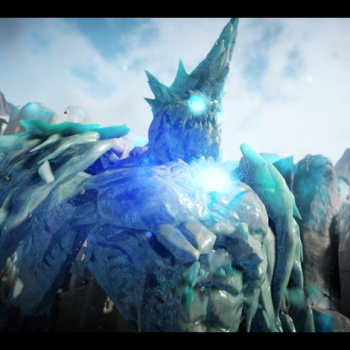 It's not an official Epic Games benchmark, but the demo should give you a rough idea of how UE4 will run on your PC.

Unreal Engine 4 is not yet the dominant force that UE3 is, but console support and Epic's new monthly subscription license model should change that rather quickly.

So it could be a little while before every other video game released runs on UE4. But why wait? If you're a PC gamer looking to test your hardware's mettle against Epic's latest engine, there's now an unofficial Unreal Engine 4 benchmark utility making the rounds online.

Spotted over on NeoGAF, the executable runs the "Elemental" demo that Epic's been using to demo their engine tech. Complete with lava and the giant...lava knight dude, the demo has been stripped out of Unreal Engine 4.1 editor, and packaged all by itself.

Sadly, my gaming deaktop is still packed away post-LA-to-Boston move, so i haven't tried the demo yet. The OP in the aforementioned NeoGAF thread used the benchmark on his Core i5-2500K/GTX 770 PC, and averaged just over 47 fps while running the demo with Fraps turned on. Users can, via the settings text file, adjust v-sync and resolution, but not much else.

The demo is not an official Epic Games endeavor, and hopefully the company doesn't take umbrage with some DIY-types releasing the demo into the wild for free.

You can check out the demo for yourself here (via MediaFire).