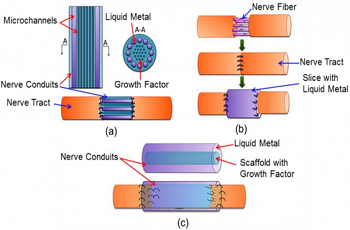 Biomedical engineers at Tsinghua University in Beihing are testing a nerve damage treatment that would include liquid metal injections.

Nerve damage isn't fun. In fact, if you find yourself in the unlucky spot of suffering peripheral nerve damage, the healing process on its own can leave your muscles atrophied to the point of permanent disability. We imagine we don't have to explain why science, in turn, has been looking for ways to keep that from happening. That being the case, the answer may have finally been found.

Chinese biomedical engineers working at the Tsinghua University in Beijing may have devised a way to keep muscles active by injecting a liquid metal alloy into the body to bridge the gap between healing nerves. The alloy in question (gallium-indium-selenium) was selected specially because its melting point was the rough equivalent of body temperature, a property that would keep it from solidifying in the human body.

While human trials have yet to occur, experiments conducted on bullfrog calf muscles showed that electric test pulses were able to pass between otherwise severed nerves when they were treated with the alloy. In other words, the nerves worked when equipped with an alloy bridge. These results have the developing researches understandably excited. "This new generation nerve connecting material is expected to be important for the functional recovery during regeneration of the injured peripheral nerve and the optimization of neurosurgery in the near future," they said.

That said, the process still has several of hurdles to jump. A succession of new animal tests is already being planned to help further test its effectiveness. And even then, the prospect of human trials raises some understandable questions and concerns about the potential side effects of injecting liquefied metal into a person's body. Granted, there's a part of us that's hopeful we'll all just wind up like Wolverine, but we can understand the need for caution.