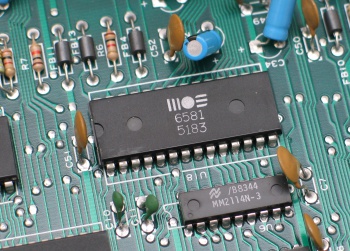 Bioengineers have developed a circuit board modeled on the human brain that can simulate neuron interactions 9000 times faster than a typical PC and at a fraction of the power consumption.

The brain is the world's most efficient computer. Even a mouse's brain operates 9000 times faster than a PC simulation of its functions, and the PC takes 40,000 times more power to run, according to Kwabena Boahen. The associate professor of bioengineering at Stanford released a new article detailing the work his team has done on developing the Neurogrid, a circuit board modeled after the human brain.

Consisting of 16 custom-designed "Neurocore" chips, the Neurogrid can simulate 1 million neurons and billions of synaptic connections, which is orders of magnitude more than other brain mimics out there, all while requiring no more power than a tablet computer. Unfortunately, cost is currently a big factor: the current prototype costs about $40,000. However, the Neurogrid's Neurocores were made using 15-year-old fabrication technologies, and Boahen believes costs can be cut 100-fold by switching to modern manufacturing processes and bulk-production.

One practical application of Neurocore chips can be found in the realm of prosthetics. Boahen envisions a Neurocore-like chip that could be implanted in a paralyzed person's brain, interpreting those intended movements and translating them to commands for prosthetic limbs in real-time. A small prosthetic arm in Boahen's lab currently serves as a proof-of-concept.

While Boahen notes that the Neurogrid is roughly 100,000 times more energy efficient than a PC simulation of 1 million neurons, it still comes nowhere close to biological model on which it is based.

"The human brain, with 80,000 times more neurons than Neurogrid, consumes only three times as much power," Boahen writes. "Achieving this level of energy efficiency while offering greater configurability and scale is the ultimate challenge neuromorphic engineers face."