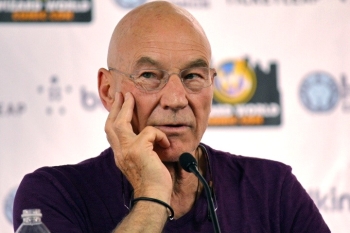 Sir Patrick Stewart is set to star in Blunt Talk, a new comedy series from Seth MacFarlane and Bored to Death creator Jonathan Ames. McFarlane will serve as executive producer, with Ames, who originated the idea for the series, serving as showrunner, writer, and executive producer. The live action series revolves around Walter Blunt, described as "a British import intent on conquering the world of American cable news." Blunt, played by Stewart, is a well-meaning but misguided host of a nightly interview show, beleaguered by his news staff, his dysfunctional family, and supported by an alcoholic manservant he brought along from Britain. Confident in the series, Starz has ordered two seasons of Blunt Talk, bypassing a pilot.

Chris Albrecht, Starz CEO, says, "In the character of Walter Blunt, Seth, Jonathan and Patrick have found the alchemy that makes a borderline alcoholic, mad-genius-Brit the man you want fighting in America's corner. Seth and Jonathan have struck the right balance between biting wit and outright absurdity in building this world, and we cannot wait for Patrick to breathe life into Walter." MacFarlane and Stewart have worked together before. Stewart was the voice of the narrator in MacFarlane's 2012 comedy Ted, and has voiced characters on MacFarlane's animated series Family Guy and American Dad. "My career took an abrupt and radical left turn when Seth McFarlane created CIA Deputy Director Avery Bullock on American Dad," says Stewart. "This new character, Walter Blunt, is not at all like Avery, thank God, because this is live action and I am a Knight of the Realm. Blunt is, however, much smarter than Avery and has his own TV show, which has to be better than being Deputy Director of the CIA."

Stewart may be best known for his roles on Star Trek and as Professor Xavier in the X-Men films (or perhaps his New York frolics with Sir Ian McKellan), but he also has great skill with comedy. His scenes in the British sitcom Extras left me giddy for days. I'm not usually a fan of MacFarlane comedies, but this could be the one that changes my opinion.