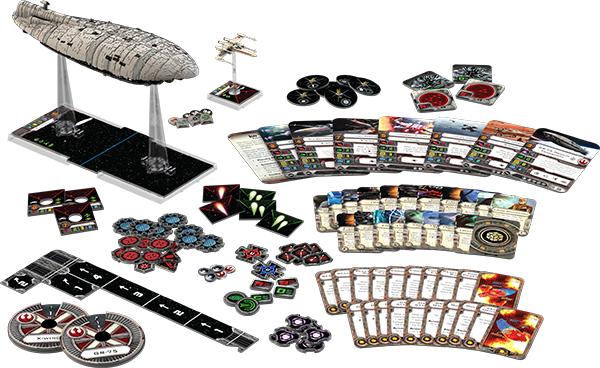 The GR-75 Medium Transport joins the flights of fighters that X-Wing usually specializes in.

Fantasy Flight Games has announced that the GR-75 Rebel Transport for their wildly popular X-Wing Miniatures is now available. While the game usually focuses on dogfighting action, the advent of larger ships brings a whole new level of play to the space dogfighting-oriented combat of the game. Until now, the game has only had smaller-scale ships like X-Wings and TIE Fighters, with the largest ships in the game being the Millenium Falcon and Slave I. The GR-75 transport is more of a massive support ship than a gun platform, though, and has the ability to recharge its allies' shields.

Adding such a large ship to the game, which uses preplanned starship maneuvers to simulate combat, necessitated inventing a whole new movement template for ships of its size. Additionally, the ship is the first to utilize an energy mechanic new to the game, deepening the already potent metagame that's developing through X-Wing's widespread tournament play.

According to Fantasy Flight's Vice President of Communications Steve Horvath, "X-Wing is the bestselling game in the company's history. The game has apparently seen "tremendous growth" that Fantasy Flight expects to continue through this year. X-Wing uses the a dogfighting system similar to the one developed in popular World War I air combat game Wings of War, but adds a point-based squad construction and upgrade system as well as the everlasting appeal of Star Wars.

Editor's Note: An earlier version of this article implied that X-Wing was explicitly based on Wings of War. This has been clarified.