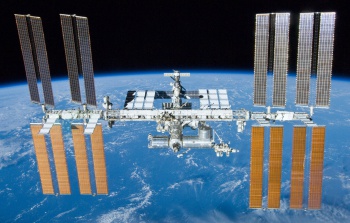 New sanctions imposed by the U.S. against Russia have prompted Russia to threaten to stop letting the U.S. use its shuttles to transport its astronauts to the International Space Station.

In response to Russia's actions towards Ukraine, NASA suspended contact with Russia in early April, except for matters related to the International Space Station. On Monday, the United States imposed a new round of sanctions against Russia, prompting Russia's Deputy Prime Minister Dmitry Rogozin to threaten to stop letting the U.S. make use of its space shuttles.

"The United States introduced sanctions against our space industry... We warned them, we will reply to statements with statements, to actions with actions," Rogozin wrote on Twitter. "I propose that the United States delivers its astronauts to the ISS with the help of a trampoline."

With no active shuttles of its own, the U.S. has relied on Russia to send astronauts to the ISS since 2011. However, given Russia charges a cost of $60 million per person and the industry needs the funding, analysts believe Rogozin's threat to be hollow.

The new sanctions imposed by the U.S. deny export licenses for any high-tech items that could aid Russian military capabilities, including satellites. Russia had planned to launch five commercial satellites this year, contracted by foreign clients; these launches may now be at risk.

"This is a very sensitive issue since our defence industry was completely unprepared for such developments," said Sergei Oznobishchev, director at the Institute for Strategic Assessments think-tank in Moscow. "Both sides will suffer, but Russia will lose out more in terms of technology transfer."