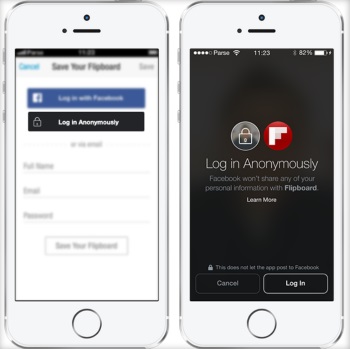 Remember when Facebook founder Mark Zuckerberg said that people who trusted him with their personal information are "dumb fucks" because he has absolutely zero regard for the concept of privacy? Things have changed an awful lot since then, as issues ranging from Edward Snowden to Heartbleed have dragged privacy concerns into the light of the mainstream consciousness, and now even Zuckerberg is singing a different tune.

Speaking at the f8 Developer Conference, Zuckerberg revealed Facebook's new "anonymous login" option, which will let users access third-party apps without sharing any personal information from Facebook. If the user decides to commit to the app at some point down the road, the login can be changed to share additional information if so desired.

The standard Facebook login is being changed too, and will now offer "line by line control" to allow people to choose what information they share with third-party app makers. The new Facebook login also won't post to Facebook without permission, ensuring that your Facebook friends won't know what sort of silliness you're up to if you don't want them to, and a redesigned App Control Panel will give users a full list of their apps and let them manage permissions or even remove apps outright.

I think it's fair to say that the changes are long overdue, but welcome nonetheless. Facebook's notoriety for its near-abusive treatment of personal information is well earned; I've always been careful about what I put on the site but I was still caught by surprise - a very unpleasant surprise - when I discovered that my phone was automatically uploading photos I'd taken to my Facebook account, simply because I failed to specifically tell it not to. That sort of "negative option" approach, which requires users to deny permission rather than grant it, is a terrible way to do business, especially in this era of runaway surveillance and security leaks.

The anonymous login option is currently being tested with just a handful of developers but will be opened up to more in the coming months; the App Control Panel is also planned to go live in the very near future.