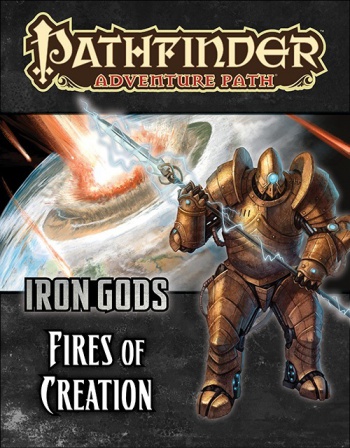 Iron Gods is Pathfinder's 2014 Adventure Path, and will focus on a science-fantasy realm of "gravity suits and nuclear resonators and atom guns."

Paizo has released a suite of details on its 2014 Adventure Path for the Pathfinder Roleplaying Game, titled Iron Gods. The series of adventures will focus on a realm called Numeria, where an ancient crashed space vessel littered the fantasy land with the products of advanced super science. The inhabitants of that land, however, are barbaric - and powerful weapons haven't made them any less so. The power behind the throne of Numeria itself, apparently, is actually a mighty force called the Iron Gods. According to the Paizo description of the adventures, "The Iron Gods are ready to make their presence known, and if they are not opposed by the region's newest heroes, a scourge unlike any the Inner Sea has seen will arise!" The adventures will being this August, debuting at Gen Con as part of Paizo's plan to combat the new edition of Dungeons & Dragons.

In a post on the Paizo blog, Creative Director James Jacobs called Numeria a place of "lasers and robots and radiation and gravity suits and nuclear resonators and atom guns and neurocams and K-lances and heavy weapon harnesses and robojacks and thoracic nanite chambers and graviton generators and more." Sounds fascinating, and a great twist on the usual fantasy fare that Paizo offers - similar to that time they did an adventure where the players must travel across time and space to World War I and kill Rasputin. No joke.

Additionally, Paizo has released names and authors for all the adventures in the series, as well as details for the first three.

Pathfinder is currently the most popular roleplaying game there is. It is an update on the older 3.5 Edition of Dungeons & Dragons. Adventure Paths are series of linked adventures published for the game, designed to take players from starting heroes to the pinnacles of power over an extended storyline. Paizo's Adventure Paths take place in its proprietary game setting of Golarion.

The Gauntlett: How Little Fears Returned the Worst of your Childhood Nightmares Karloff 4 Comments

Days of High Adventure: How the Three-Act Structure Improves Your Roleplaying Game Rhykker 4 Comments
Comments on