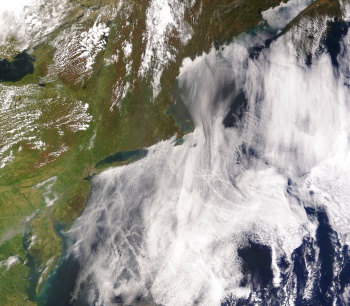 A new government report has summarized the present and future impacts of climate change on the U.S. and confirmed that some changes are happening faster than predicted.

The U.S. government has released its 2014 National Climate Assessment, a report produced by a team of more than 300 experts and reviewed by a panel of the National Academy of Sciences. The major conclusion? Human-induced climate change continues to strengthen, and its impacts are increasing across the country.

This is the same conclusion we've been hearing for years from various sources, but the report does highlight one finding it calls a surprise: that certain changes are happening faster than previously projected, such as sea level rise and the melting of Arctic sea ice.

The full report is a staggering 840 pages and can be downloaded from the official website, which offers a convenient overview. Some notable findings include the average temperature in the U.S. increasing by 1.3°F to 1.9°F since record keeping began in 1895, an increase in heavy downpours, heat waves, floods, and droughts, and the rise of global sea levels by eight inches since reliable record keeping began in 1880. Projections estimate sea levels will rise by another one to four feet by 2100, and the Arctic Ocean is expected to become ice free during the summer months before mid-century.

It's not all bad news, though. Between 2008 and 2012, there was a decline in the total amount of carbon dioxide emitted annually from energy use in the U .S. However, global emissions in 2011 were around 34 billion tons and have been rising by about 0.9 billion tons per year for the past decade. To mitigate the effects of climate change, the report assesses that global carbon emissions would have to peak at around 44 billion tons per year within the next 25 years; at present rates, we're expected to surpass that figure within a decade.

Personally, what I find most remarkable about all this is that the government managed to put together a website that isn't an eyesore.