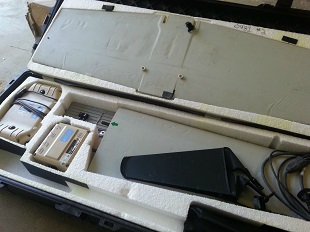 Dang kids and their music and their aerial drones!

The National Ocean and Atmospheric Administration has a bone to pick with UPS.

Somehow, parts for one of the NOAA's Puma aerial drones ended up in the hands of a college kid. The drone was shipped in eight bozes from an NOAA command center in Tampa, FL, to the Stellwagen Bank Marine Sanctuary in Massachusetts. One of the eight boxes, which contained wings and a control panel, ended up in the hands of an anonymous college student, who posted images of the box and its contents to Reddit and Imgur.

The kid, who is still anonymous at this point, returned the package to UPS this morning. "It's been an interesting morning. I called the number that I was given yesterday, and spoke to a man who's title was Commander. I offered to bring the crate to the nearest UPS store, and he said that would be great. He must have contacted UPS, as I received a fair amount of calls and voicemails from them. I returned one, and was told I'd be meeting the UPS security head of the local branch, and he'd pick up the crate personally. I went to the store and handed it over."

Hopefully the feds don't go all Hackers or E.T. on this kid, since the drone hardware is seemingly on its way to its proper destination.