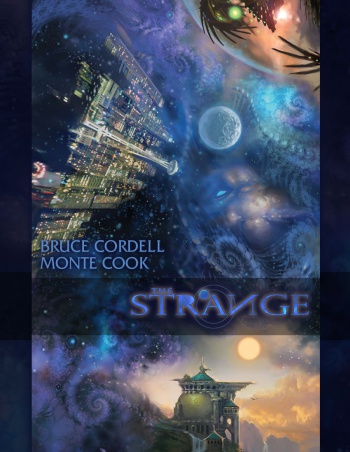 The Strange will be a dimension hopping roleplaying game of exploration and intrigue.

Monte Cook Games has announced the release date of their newest roleplaying game, The Strange as August 2014. The Strange will use the same Cypher System utilized in Monte Cook Games' previous system, Numenera, but will include design work by Bruce Cordell in collaboration with Monte Cook. The game books are now available for pre-order, with the core rulebook a $59.99 and the player's guide at $19.99, both including an e-book edition. The Strange was Kickstarted last year for $418,478.

Both Monte Cook and Bruce Cordell are veteran designers who have worked on not just Dungeons & Dragons, but a variety of other roleplaying games over the years. Cook is known for his worldbuilding and setting creation, having a key hand in the Planescape setting for D&D. Monte Cook Games' other well known game is Numenera, a science fantasy epic which sold quite well will be featured in the upcoming inXile video game Torment: Tides of Numenera.

Here's the official word on what The Strange is all about from MCG:

Beneath the orbits and atoms of our natural universe lies a network of dark energy. Those who have learned to access and navigate this chaotic sea have discovered an almost endless set of "recursions" in the shoals of our Earth: Worlds with their own laws of reality, reflected from human experience or imagination, given form in the swirling Chaosphere of the Strange. Worlds teeming with life, with discovery, with incredible treasures, and with sudden death.

Worlds sometimes jealous of our own.

The secret plunder of these worlds draws the brave, the daring, and the unscrupulous-and it draws dangerous enemies from these recursions back to our Earth.

And slowly but inexorably, it draws the attention of beings from beyond Earth's shoals-beings of unfathomable power and evil from the unknown reaches of The Strange.

You can see the official announcement over at Monte Cook Games' website.