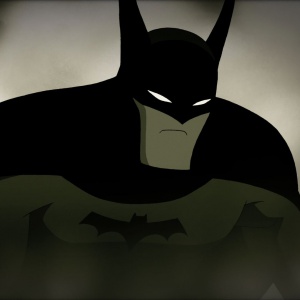 Bill Finger remains one of the most unjustly obscure figures in the history of American comics. Lacking co-creator Bob Kane's business acumen and savvy, he was essentially taken advantage of when the contract Kane secured from DC gave him sole credit. For 75 years, "Created by Bob Kane" has graced every single Batman-related product, and almost all discussion of the character has taken that statement as the word of law.

But Finger did, in fact, more than any other person to develop and codify the things that make Batman, well, Batman. So much of so that without him, everything but the name "Batman" goes away. (This comic handily illustrates the matter.) It's almost a crime against art that while Bob Kane lived off Batman for the rest of his life, Finger died broke and unknown in 1974.

But in recent months, a push to give him the recognition he deserved has succeeded in making him more well known, and so it was that at a WonderCon panel called "The Men Who Made Batman", a television show about the Batverse whose title is taken from the city that Finger both conceived of and named, DC was put in an awkward position when a fan asked them point blank why DC allowed Finger to go (and continue to go) uncredited. DC Comics' Larry Ganem, after a very awkward silence, said "we cherish what Bill Finger did and his contribution to creating Batman, and we're all good with Finger and his family."

As it turns out, that's not exactly true. Finger's surviving family, his Granddaughter and her son, were not pleased by Ganem's comments, and last night issued a press statement on the issue, quoted here in full:

"75 years of Batman! No one could have predicted the longevity and the continued relevance of this comic book hero that has become a cultural icon when my grandfather, Bill Finger, collaborated with Bob Kane back in 1939. My grandfather has never been properly credited as the co-creator of Batman although was an open secret in the comic book industry and is widely known now. It is now my time to come out of the shadows and speak up and end 75 years of exploitation of my grandfather, whose biggest flaw was his inability to defend his extraordinary talent. Due to what I feel is continued mistreatment of a true artist, I am currently exploring our rights and considering how best to establish the recognition that my grandfather deserves."

That's a rather feisty statement. But does it mean the family intends to sue? Perhaps, but the success of such a lawsuit will depend on how far they wish to take it. Attempts by a creator's heirs to assert any kind of control over creations long-owned by a major comic publishers face serious obstacles. Jack Kirby's family almost certainly hobbled their case against Marvel when they attempted to sue for full control of Kirby's characters instead of accepting a settlement. On the other hand, a solid case could be made legally that, at minimum, Batman needs to be credited to Bob Kane and Bill Finger. It will be interesting to see what action the Fingers take.

Many commenters will probably bristle at the implication that they may be considering a lawsuit. And I get that. The argument that Finger's descendents shouldn't be able to get rich off of his work makes a kind of sense. Indeed, it's also been employed against the family of Jack Kirby. However, I would consider that the principle of the matter is more important than whether or not Finger's descendents "deserve" any money. As we discussed in our feature The Life Of A Comics Artist: Divided and Conquered, the history of the comics industry is replete with exploitation that has allowed savvy, often dishonest and highly manipulative people and entities to make billions off the work of artists and writers who earned, at best, just enough to scrape by. Finger deserves to be credited for the work he did that made DC billions, and frankly, some of the money that he should have been able to benefit from should be paid, even if only to his descendents.

What do you think, readers? Sound off in comments.