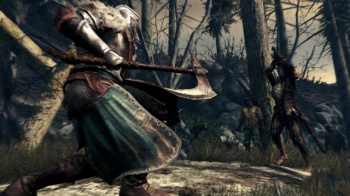 Namco Bandai has revealed its financials report for the fiscal year and sales are up 4.2%, with Dark Souls II moving over one million units just on the Xbox 360 and PS3.

Publisher Namco Bandai has revealed its financial earnings report for the fiscal year ending March 31, 2014, where the publisher declared a profit of 25 billion yen profit (approximately $245 million). Most notable and the biggest moneymaker for the company was From Software's Dark Souls II, which the publisher has revealed has now shipped 1.2 million units to date in North America and Europe -- and this is just counting the PS3 and Xbox 360 versions.

If you've yet to play the action-RPG,The Escapist's review of Dark Souls II rates it almost full marks and calls it "the best RPG released this year." You can also check out the different ways you can die in the game, which is oddly enough, one of the game's selling points.