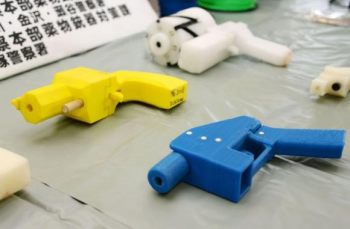 Several of the plastic weapons are capable of causing injury.

A 27 year old resident of Kawasaki, Japan, has been arrested on charges of illegal possession of firearms, all of which were created by 3D printer technology. The police discovered five plastic weapons and a 3D printer at the suspect's home, and two of the firearms were later proved to be capable of killing or wounding, according to a report by public broadcaster NHK. This is believed to be the first time that a man has been arrested in Japan for printing his own guns.

"I made the guns by the 3D printer at home. I did not think it was illegal," the suspect is quoted as telling police. Firearm blueprints were found on the suspect's computer, which are believed to have been downloaded from the internet. The police have declined to comment on the case.

The suspect is known to have made several social media and Twitter comments justifying possession and manufacture of guns, and is said to have posted YouTube videos showing him firing what appears to be a 3D printed pistol. He's alleged to have claimed that gun restrictions are a violation of human rights.

According to the Jiji news agency, in addition to the printed weapons the suspect also possessed ten toy guns.