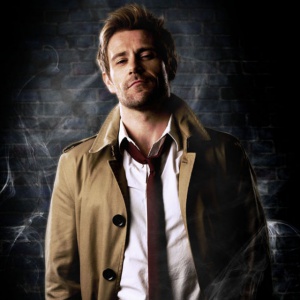 This might actually turn out to be a good thing.

Good news, or potentially bad news, for comic lovers who'd like to see more of what they love on the teevee. You'll recall back in January when it was announced that NBC had commissioned a pilot based on DC Comics character John Constantine? Well the network is apparently pleased enough with the concept it doesn't need to test said pilot, as it's been announced today that a full series has been ordered, planned to air sometime later this year.

The potential bad news? I won't deny that I've been living with a kind of low level anxiety about the prospect of adapting Hellblazer (or is it The New 52's version of John Constantine) for network TV. Despite assertions that the show will "cling" to the source material, the source material in question is some of the most profane and outright blasphemous imaginable. If it were HBO or perhaps even FX or AMC adapting it, I'd rest easy, but one of the 5 broadcast networks? You can't even have a wardrobe malfunction, cough, during the Super Bowl that accidentally introduces people to the concept that women might have breasts without causing a national panic. I fear any network version of Constantine will be so neutered to avoid potential backlash it might as well not even be made.

Except... the good news is that NBC has been hurting for several years running and they're responding by throwing everything at the wall. The result has often been bad, but this is also the same network currently giving us Hannibal, which is not only good but also shockingly unlike anything I would have ever expected to see on a network. Further, while it contains some of the least consistent characterizations and an almost lego-ized plot (just snap new blocks into place as needed, no matter how it looks), Revolution has turned out to be one of TV's most violent shows. All of which is to say that maybe, just maybe, Constantine might not be entirely neutered after all. We'll all find out for ourselves either way.

No word yet on how this series will roll out, whether it be a full 23-24 episode season or the 13-episode season structure common on cable and already used to great effect by NBC with Hannibal. Hopefully it'll be the latter; Shorter-episode seasons are in my opinion superior to the increasingly inflamed appendix that is the traditional length season. They not only spare audiences from the tedium of filler episodes necessary to pad out even the best shows, they also force tighter narratives with more advance planning. That can only help something as mythos heavy as anything based on John Constantine would have to be in order to work.

So it is that, right now, I'm cautiously optimistic about the prospects of Constantine. Feel free to agree, or angrily disagree, in comments.

Constantine will star Matt Ryan in the titular role. Here's the official synopsis:

Based on the wildly popular comic book series "Hellblazer" from DC Comics, seasoned demon hunter and master of the occult John Constantine (Matt Ryan, "Criminal Minds") specializes in giving hell... hell. Armed with a ferocious knowledge of the dark arts and his wickedly naughty wit, he fights the good fight - or at least he did. With his soul already damned to hell, he's decided to leave his do-gooder life behind, but when demons target Liv (Lucy Griffiths, "True Blood"), the daughter of one of Constantine's oldest friends, he's reluctantly thrust back into the fray - and he'll do whatever it takes to save her. Before long, it's revealed that Liv's "second sight" - an ability to see the worlds behind our world and predict supernatural occurrences - is a threat to a mysterious new evil that's rising in the shadows. Now it's not just Liv who needs protection; the angels are starting to get worried too. So, together, Constantine and Liv must use her power and his skills to travel the country, find the demons that threaten our world and send them back where they belong. After that, who knows... maybe there's hope for him and his soul after all. The cast also includes Harold Perrineau and Charles Halford. Writer Daniel Cerone ("The Mentalist," "Dexter") serves as executive producer with David S. Goyer ("Man of Steel," "The Dark Knight Rises"). "Constantine" is produced from Bonanza Productions in association with Warner Bros. Television. The show is based upon characters published by DC Entertainment.