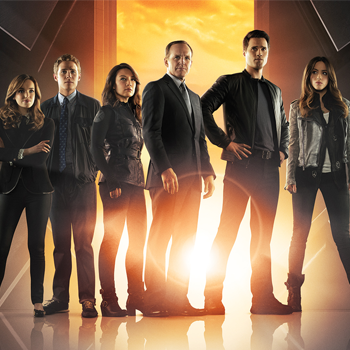 Marvel Studios' TV heroes will live to fight another day

It's officially Fall TV Season Planning Time, and ABC didn't waste any time in confirming that it plans to stay in the Marvel Cinematic Universe spin-off business. The network has renewed Agents of S.H.I.E.L.D., just a few days shy of one week before the series reaches its first season finale.

The series, which spun off from the events of The Avengers, follows the adventures of an elite team of agents from the Marvel Universe spy agency as they traverse the globe investigating threats from alien invaders, super-criminals and other sinister sources. Clark Gregg leads the team as Agent Phil Coulson, whose mysterious backstory (he was killed during The Avengers but somehow restored to life in secret) formed the basis for much of the first season's story arc. Chloe Bennett, Ming-Na Wen, Elizabeth Henstridge, Iain De Caestecker, Brett Dalton were also part of the original regular cast.

Agents had one of the most-watched pilots of last year, but faced rocky ratings and heavy criticism for much of its initial run. However, a major upheaval to the series' status quo in brought about by the events of Captain America: The Winter Soldier was widely seen as having been a major course correction.

At this time, no story or casting details for Season 2 have been released. In addition, ABC also ordered the Marvel prequel series Agent Carter, which will be set during the early days of S.H.I.E.L.D. and follow the adventures of Haley Atwell's character from Captain America: The First Avenger.