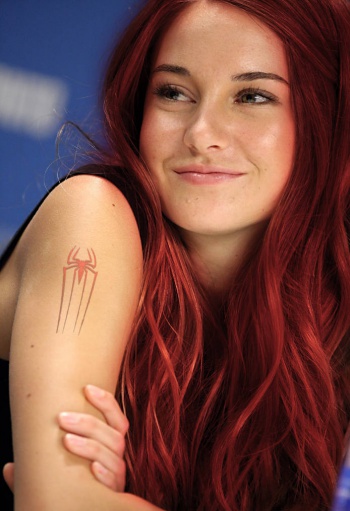 While Gwen Stacey (played by Emma Stone) was Peter Parker's love interest in Amazing Spider-Man and its sequel, comic book fans (and even non-comic book fans) already know it's a romance that won't last since in the comics, Parker eventually marries Mary Jane Watson. In the Amazing Spider-Man 2, director Marc Webb actually shot a few scenes with actress Shailene Woodley (Divergent) portraying Mary Jane. So, why was it left out of the theatrical release, then? Webb explains below, but before reading on, be warned that there are spoilers inbound, so proceed at your own risk.

Speaking to The L.A. Times, Webb states, "Shailene is a brilliant actress, and she did a great couple days of work...But it was very difficult to introduce someone as a competing love interest when so much is on the table with Peter and Gwen." Producer Matt Tolmach adds, "We bit off more than we can chew. We had a superhero opera, and as great as Shailene is, she didn't really co-exist with the bigger story we were telling...It felt like a distraction. You can't have Peter thinking about Gwen every moment and then there's this girl next door who's suddenly there...We weren't ready for it."

Given how comic book films often tease upcoming characters in future entries, this is certainly quite a surprise. But based on the statements above, they do make sense. So, should we assume to see Woodley's Mary Jane in Amazing Spider-Man 3, then? While the actress is open to reprising her role, nothing official has been announced so far, with The Hollywood Reporter claiming that we will indeed see MJ in the third flick, but the role will be recast.

Which actress would you want to be cast as MJ in Amazing Spider-Man 3? And did Webb did the right thing in cutting Mary Jane's part out of the sequel?

Source: The L.A. Times via IGN