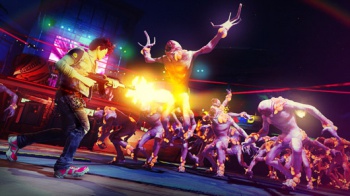 Sunset Overdrive co-creators Marcus Smith and Drew Murray explain why the game is exclusive to Xbox One.

In tweets spotted by OXM, the official Insomniac Twitter states that "exclusivity wasn't about money."

@mikentity wasn't about money, was about our controlling and owning the IP, and their belief and desire to execute our vision with us— Insomniac Games (@insomniacgames) May 10, 2014

@ajross80 retaining our IP is always our number one concern. Microsoft is funding and publishing the game and believes in the idea— Insomniac Games (@insomniacgames) May 9, 2014

So, yeah, it's most likely a factor of Insomniac wanting to retain ownership of the Sunset Overdrive IP than the usual "moneyhats" that people might have presumed.

Just yesterday, Insomniac Games revealed the first-ever gameplay video for Sunset Overdrive, which is exclusive to Microsoft's Xbox One. So, just why is the game exclusive to Microsoft's platform? Speaking to IGN, game co-creators Marcus Smith and Drew Murray explains why and it's not as cut-and-dry as Microsoft throwing a truckload of money at the studio and calling it a day.

With Sunset Overdrive's concept set internally at Insomniac, it was then time to look for a publisher. According to Smith, Insomniac CEO Ted Price wanted to retain ownership of the brand, which was a deal breaker to some of the publishers the studio talked to.

We pitched it a few different places, and it was really important to [Insomniac CEO] Ted [Price] that we own the IP, so some of the conversations broke down over that...With Microsoft, they just came in very energetic and excited to work with Insomniac, period. And we'd heard some really good things about them and some resources that they would be allowing us to have.

As for the actual pitch to Microsoft, Murray and Smith went multiple times to Seattle to sell the game. Murray recalls how in the "main" pitch, he was wearing his lucky shoes, which he hasn't changed in two weeks and was riddled with holes. "We're presenting, and I have these wet socks up in Seattle. I swear, there must have been six or seven levels of hierarchy at this thing." Smith agrees with the hierarchy levels and mentions, "It's the guy we know, and his boss, and his boss, and his boss... But it started off with us cluing into the speaker system in the conference room and playing the sample from the beginning of MC5's 'Kick Out the Jams', where it's like, "kick out the jams, mother fucker,' not knowing that one of the executives there hates swearing. And then it ended with Drew on top of a chair, mimicking how the game was going to play, and the last minute heroics. It was epic, and I'm shocked they didn't walk away from the table at that point. But for some reason, here we are."

Just assuming here, but I'd take it "resources" in this instance means money Microsoft gave to Insomniac to fund development of the game. Regardless, though, Insomniac wanting to own the franchise it's creating seems like a reasonable demand to me. From what Smith said, it seems the studio might have shopped it to Sony first, but Sony wanted to own the brand, which killed the deal.

For more on Sunset Overdrive, make sure you read up on The Escapist's preview, where it's dubbed "Tony Hawk with guns."