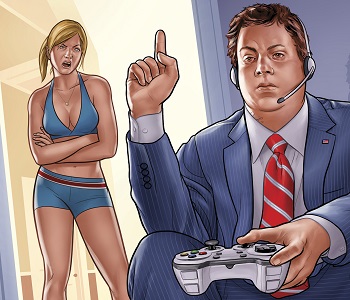 The survey shows that gamers are more likely to back new technologies and are hesitant to support government regulations.

Perhaps it's the many years of being threatened with bans and censors, but apparently, gamers are pretty suspicious of government involvement. According to a recently survey conducted by Reason Magazine, those who play video games are less likely to support government regulations on things like online gambling, marijuana, and 3D printed guns than non-gamers.

When it comes to party affiliation, the survey showed that gamers (who comprise 57% of the population) are more likely to be liberal-leaning independents. However, when asked about specific issues, they generally opposed government involvement. For every controversial topic in the survey, like buying genetic testing kits, caffeinated energy drinks (which are on the chopping block), online gambling, and drugs, gamers were far less likely to support bans or regulations. The largest gap was Bitcoin. Where only 30% of non-gamers support the use of the electronic currency, 55% of gamers did. According to Reason, the majority of both groups admit to having very little knowledge of Bitcoin, implying that gamers seem to be less likely to ban things that are weird or different.

This mistrust of the government was also seen in a question about policing power. When asked if most police officers are generally held accountable for misconduct, gamers answered no 63% of the time. Compare this to the non-gamer population, which was almost split on the issue (with 51% saying yes).

Other findings of the survey are pretty obvious. For example, gamers are far more excited about new technologies like drone deliveries. There were a few other surprises, however, such as the fact that a fifth of all gamers are over the age of 55.