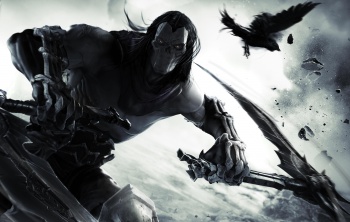 Comic book artist and Darksiders franchise creative director Joe Madureira has posted on Facebook that the franchise is not dead, and he's hopefully news can be shared soon.

Update: In a statement sent to RPS, Nordic Games issued the following response:

With regards to Darksiders 3: of course we've always been busy in the background, talking to a lot of former team members about a continuation of the series, but we are not ready to announce anything officially. Joe Madureira is spot on in saying that DS is not dead and we are committed, though.

Before we can say something about the 'how' and 'when' of publishing/financing the sequel is concerned, we are still busy in properly figuring out the 'who' part of this large-scale project. All I can say is that we can and will not settle for second-best solutions in the case of Darksiders.

Yep, it seems Darksiders 3 will be happening at some point in the future -- it's just we don't know who'll be developing it or when it will be out. But at least fans can rest easy and know the franchise will be back.

Last time we heard about Vigil Games' action-adventure RPG franchise Darksiders, it was gobbled up by Nordic Games who also bought THQ's other properties. Now, though, it seems the franchise might be on the verge of a comeback. Posting on his official Facebook page answering fan questions, comic book artist and former Darksiders creative director Joe Madureira claims DS is not dead, and that's he's hopeful he can share news about it soon.

Darksiders-- DS is not dead!!! The new owner, Nordic seems very committed to continuing the series. As far as my involvement, I can't say at this point. Hopefully we will all have exciting news about the franchise soon!!!!!!

It seems franchise fans might be able to continue the Darksiders story after all. Of course, this is with the assumption that Nordic will continue where the last game -- Darksiders II -- left off, and not start from scratch to reboot the franchise. For those curious, The Escapist's review of Darksiders II calls it "a great game with a wealth of content, combing elements of numerous other games (and well) from within an interesting world ready to explore."

Do you want to see more Darksiders games? What improvements does the franchise need in order to hang with the other RPG giants? I'm hoping that if and when the franchise returns, we'll finally get to experience that Four Horsemen of the Apocalypse co-op that Vigil Games originally envisioned.