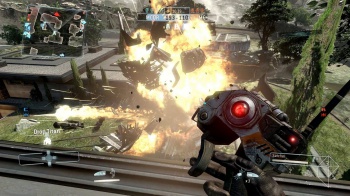 Titanfall's Expedition DLC will hit the PC and Xbox One later this month, but Xbox 360 will have to wait for the content, along with other updates.

Not only did Xbox 360 players have to wait a little longer for Titanfall to make its way to the last-gen platform, it seems this will be the norm for DLC and updates moving forward, as well. In a post on the official Titanfall site, it states that Xbox 360 Titanfall developer Bluepoint Games will continue its partnership with Respawn by being the studio to bring updates and DLCs to the shooter for Xbox 360 users. However, the post also reveals and explains that updates and expansions will only be implemented on the Xbox 360 version once the PC and Xbox One gets them first.

Updates for the Xbox 360 will naturally follow behind similar updates for the PC and Xbox One. This timing difference is due to the same reasons that more time was needed to finish Titanfall or the Xbox 360. Respawn must first finish their additions and improvements for the Xbox One and PC, and afterwards Bluepoint can then grab the latest and update the Xbox 360 version. We're working with Respawn and Bluepoint to streamline the process and close the gap, allowing Xbox 360 updates to be published as closely as possible to Respawn's updates.

According to the post, At the moment, Bluepoint "is bringing over changes included in the Xbox One's Content Update 2 while also working on the Expedition DLC. We asked them to split the CU2 into two parts, which includes the update to the Gooser challenge that recently went live, with the rest of the changes becoming available soon."

The first DLC for Titanfall named Expedition, will make its way to Xbox One and PC later this month, with the Xbox 360 version getting it in June.