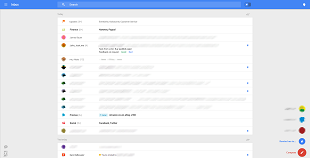 The new design could signal a shift in UX/UI for Google in the coming months and years.

Geek.com has the scoop: Google is actively testing a radically redesigned Gmail interface for the web.

The redesign is more than just a component or two being tacked onto the existing Gmail web client. Yes, you still read emails top to bottom, left to right, but notifications, menus, and a new pin system are in play.

Most notable, aside from the generally cleaner-looking layout, is the notification system, which has been moved to the bottom-right corner of the interface. Here you can see notification and task icons for everything from composing emails, to meeting reminders.

Pins, which will likely replace the Star system Google currently employs, will take the most getting used (for me, anyway). But first impression? It looks slick, clean, organized, and I hope Google pushes this out (or something like it) in the coming weeks or months. And, knowing Google, you'll be able to retain the old design for a while as you migrate over and grow accustomed to the changes.

Check out all the screenshots over on Geek, and let us know what you think in the forums.