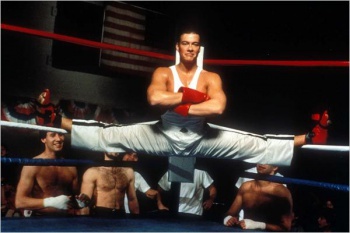 The 1989 martial arts flick Kickboxer that propelled Jean-Claude Van Damme into stardom will be getting a remake starring the UFC's George St. Pierre and WWE's Batista.

WWE star Dave "Batista" Bautista and former UFC Welterweight champ George "Rush" St. Pierre (or more commonly known as GSP) are set to star in a remake of the 1989 martial arts film classic, Kickboxer. For those not familiar with the movie, it starred Jean-Claude Van Damme and is arguably the film that propelled him into being a household name. However, Batista, nor GPS won't be the main protagonists in the film, as that spot will be taken up by stuntman and martial artist, Alain Moussi (X-Men: Days of Future Past, Pacific Rim). According to The Hollywood Reporter, producer Bryan O'Shea is currently shopping the film in Cannes. "We have a visionary director, a strong Hollywood producer, great cast and an action-packed script based on a well-known property," claims O'Shea, and adds, "What more can you ask for?"

While the cult classic film was originally directed by Mark DiSalle, the remake will be helmed by Hong Kong director Stephen Fung ( Tai Chi Zero, Tai Chi Hero), and is being "plotted" by producer Ted Fields from Radar Pictures who claims, "Alain is a star and will be an amazing leading man...Like Vin [Diesel] in Riddick, Alain will make this movie very special, and this Kickboxer will be the start of an amazing franchise."

Batista can be seen on the big-screen next as Drax in Marvel's Guardian of the Galaxy, while St. Pierre recently appeared in Captain America: The Winter Soldier. To date, it's still uncertain whether the Kickboxer remake will hit theaters or be a direct-to-video venture, but as a martial arts movie buff, I personally hope it's the former -- and yes, I wouldn't mind seeing a cameo from Van Damme in it, too.

Source: The Hollywood Reporter via NerdBastards