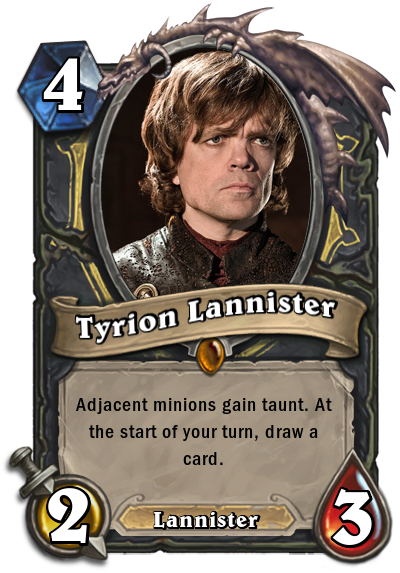 An enterprising fan has transformed 31 Game of Thrones characters into cards for Blizzard's Hearthstone.

At this point we feel safe in saying that Hearthstone is pretty danged fun. Not that we're expecting this to be any surprise to you. Heck, chances are you're probably playing it right now and you're just using The Escapist as a distraction to keep you entertained while you wait for your opponent to make their next move.

You know what else is fun? Game of Thrones. Granted, the HBO series draws its entertainment value from a slightly darker, bloodier pool than Hearthstone, but the fact remains that they're both addictive fantasy properties that draw their fans in and never let them go. In other words, they're perfect candidates for a cross over.

Enter Imgur user GameofStones who recently uploaded a custom deck of Hearthstone cards based on characters from the Game of Thrones television series. Featured among the 31 cards are prominent characters including Arya, Daenerys, Jon Snow and, of course, the king of all cool Tyrion Lannister.

The cards themselves are built from a hodge podge of properties, many of which are based very clearly off of the characters as they're portrayed in the show. Joffrey, for instance, comes equipped with a Battlecry ability that enrages his minions. Arya, meanwhile, gains +1 attack whenever a friendly minion dies. This is all just for fun, of course, but it's still neat to see all of these characters boiled down to this basic form. Take a look at the deck and let us know what you think and which are your personal favorites.