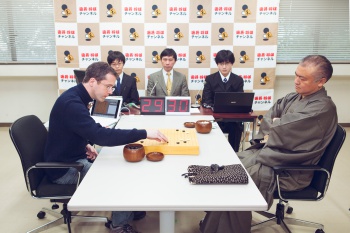 Computer program beats grandmaster Yoda in a game of Go, with a four-stone handicap.

While computers have been able to beat top human players at Checkers, Chess, Othello, Scrabble, backgammon, and poker, one game remains "the final bastion of human dominance over computers," as Alan Levinovitz puts it in a new article published in Wired. That game is Go, the Eastern version of Chess.

Programmer Rémi Coulom developed a piece of software named Crazy Stone over the course of seven years that has managed to take a significant stride in the battle of man vs. machine by defeating professional Go player Norimoto Yoda at this year's University of Electro-Commuinications Cup.

Invented over 2500 years ago in China, Go is labeled a "deterministic perfect information game," along with tic-tac-toe, chess, checkers, and Othello. But despite decades of attempts, no computer has been able to defeat a Go sage without a handicap. Even Crazy Stone's "victory" against Yoda was only accomplished thanks to a four-stone lead.

After winning the match against Yoda, Coulom stated that he believes it will be another decade before a computer is able to win without a handicap, adding, "But I do not like to make predictions." Greater processing power likely isn't the solution, but rather a better understanding of the sometimes "mysterious" nature of the moves made by the highest-level players.

"You'll be looking at the board and just know," Professional Go player Michael Redmond said. "It's something subconscious, that you train through years and years of playing. I'll see a move and be sure it's the right one, but won't be able to tell you exactly how I know. I just see it."

Try teaching that to a computer.