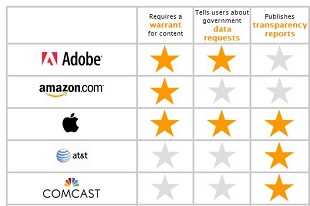 Apple, Facebook, Google, and Microsoft receive top ratings, while Comcast and AT&T are at the bottom of the barrel.

The Electronic Frontier Foundation released its now-annual "Who Has Your Back" report yesterday, which rates big tech companies on how they deal with the government on a data privacy level. Most of the big companies you know and love (or hate) were rated on a six-star scale, with each star representing a category.

The six categories are...

So who are the winners and losers? Nine companies received perfect scores, including Google, Facebook, Apple, Microsoft, and Twitter. The perfect score means that these companies are about as transparent as possible (as far as the EFF and we know, at least).

The lowest-scoring companies? Snapchat scored 1/6, Amazon and AT&T scored 2/6, and four scored 3/6 (Adobe, Comcast, Foursquare, MySpace). Comcast, Amazon, and AT&T are the most troubling of the low scorers, since two of the three handle massive quantities of Internet traffic, and Amazon is the online mecca of commerce.

Apple definitely gets the Most Improved award, having earned marks in all six categories, when it scored 1/6 in the previous three years.