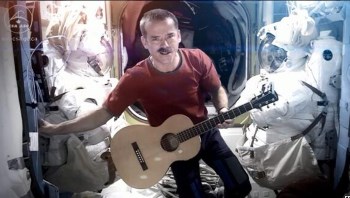 It turns out that Commander Chris Hadfield had permission to use the David Bowie classic for just one year, and that year is now over.

Commander Chris Hadfield did remarkable things during his time in command of the International Space Station, particularly in the way he brought the work being done on the station to the attention of the public at large. And when his time was finally over, he went out on an incredibly high note with a moving rendition of David Bowie's "Space Oddity," tweaked just a bit to make it a happier and more upbeat listening experience.

The cover hit YouTube on May 13, 2013 - and sadly, on May 13, 2014, it was taken down. It wasn't widely known at the time it was released but Hadfield was granted permission to use the song for just one year, and in spite of its popularity - the CBC says it racked up more than 22 million views before it was pulled - with the year gone, so is the song.

Bowie's last day - we had permission for a year, so our Space Oddity video comes down today. One last look: http://t.co/z6umXHoPCk— Chris Hadfield (@Cmdr_Hadfield) May 13, 2014

"It has been a year since my son and I created and released the Space Oddity video. We have been amazed and delighted that so many people enjoyed it - and maybe saw what spaceflight can really be like. It helped show that humans have left Earth, and that the Space Station is a new stage, for not just science and exploration, but for our art and music too. With exploration comes insight - with perspective comes self-realization," Hadfield wrote in a message on Reddit prior to the video's removal.

"We had permission from David Bowie's people to post the video on YouTube for a year, and that year is up. We are working on renewing the license for it, but as there are no guarantees when it comes to videos shot in space, we thought you might want to have one last look before we take it down," he continued. "Thanks for everything. You've all been incredible throughout."

Hadfield also linked to an Economist article explaining some of the copyright complications that arose out of the song, including jurisdictional questions and even the format in which it was released. Those issues didn't come up in this particular case because Hadfield obtained permission prior to releasing the video, but even that was apparently an arduous process, requiring several months of negotiations with Bowie's representatives as well as NASA, the Russian space agency ROSCOSMOS and the Canadian space agency CSA.

Given all that, it's not surprising that efforts to renew the license don't appear to have worked out, as the "official" YouTube video is now gone. The internet being what it is, however, it is still available here and there, including on the Sky News channel. Enjoy it while you can.