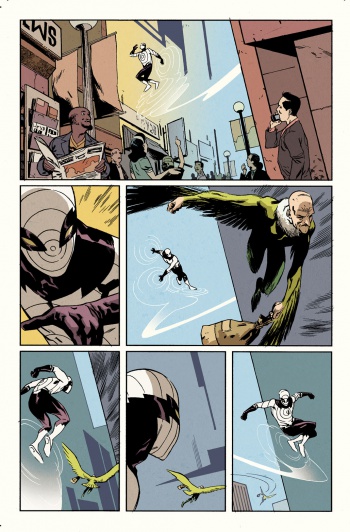 The Amazing Spider-Man is shifting gears with a storyline set during Spider-Man's origins, reverting to a classic art style while introducing new characters.

One of the strange things about managing comic book continuities is that origin stories are being retold constantly. Even Marvel Comics, a company with notably fewer universe-spanning reboots than its competitor, keeps retreading the origin story ground with books like X-Men First Class or The Marvels Project. That being said, it's pretty rare for a retelling to go that extra step and embrace art techniques of past generations. Yet that's what Dan Slott and Ramón Pérez are doing for Learning to Crawl, a storyline currently being published alongside the regular issues of The Amazing Spider-Man.

Learning To Crawl returns to the days when Peter Parker was an awkward high school student, specifically between his first appearance in Amazing Fantasy #15 and The Amazing Spider-Man #3. Peter Parker is still coming to grips with his powers, let alone New York's latest supervillains, while J. Jonah Jameson maligns Spider-Man's name in the Daily Bugle. Learning to Crawl is being published alongside Marvel's Amazing Spider-Man relaunch, numbered with decimals to distinguish stories from the core series.

It looks like Marvel is using Learning To Crawl to introduce new characters to Spider-Man's canon, retroactively implying they were around from the beginning. In this case, that would be a new supervillain called Clash (no relation to the band), a fan of Spider-Man who was inspired to put on a costume of his own. Instead of becoming a hero however, Clash will falter and become a villain who uses the destructive power of sound to wreak havoc in New York (so maybe he is like the band after all).

I have no particular opinion on Clash himself, but I have to admit that the visuals look great so far. Artist Ramon Perez has merged Silver Age and contemporary art styles in an appealing way, right down to a simplified color palette that still varies from panel to panel. Also, has some of you may have already noticed, Learning To Crawl's covers are being produced by Alex Ross, and they're as much of a pleasure to look at as ever.

Clash will be introduced with the next chapter of Learning to Crawl in The Amazing Spider-Man #1.2 this July. The first chapter is available now.