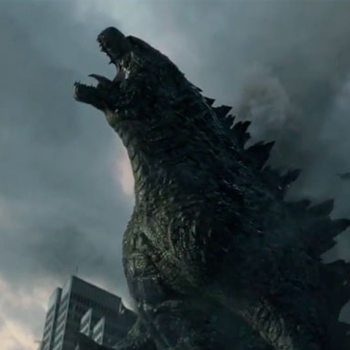 The King of The Monsters could be a $100 million hit

The first new Godzilla feature in a decade stomped all over U.S. theaters Friday, earning almost $39 million in ticket sales. Analysts are now predicting that director Gareth Edwards' ambitious update of the 60+ year-old Japanese monster franchise will earn upwards of $98 million for its opening weekend - with a distinct possibility of hitting the $100 million+ "magic number."

Also continuing to fare well is the R-rated family versus fraternity comedy Neighbors, which shocked Hollywood last week when it swatted a weaker-than-expected Amazing Spider-Man 2 from the top spot. The raunchy surprise-hit is benefitting from excellent word of mouth, and dropped only 46% to second place; though the real test will be in how it fares with another big comedy, Adam Sandler's Blended, entering theaters next week.

Speaking of Spider-Man, Sony's reboot sequel has continued to fall sharper than expected, down to third place with only a $16 million weekend now projected. With it's final U.S. earnings not expected to cross $220 million, the studio will now have to hope that international sales can push it into profitability.

The only other major new wide-release, Disney's feel-good baseball movie Million Dollar Arm, landed soft with only $10 million projected for the weekend.