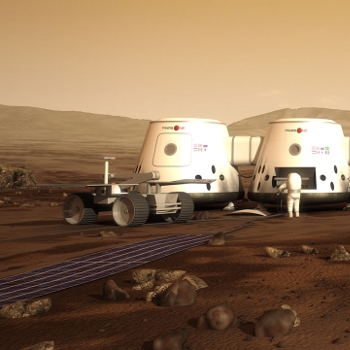 Mars One has narrowed its pool of potential martian colonists from over 200,000 applicants to 758, which include married men and women who may never see their spouses again.

By 2025, humanity will have established a permanent colony on Mars. At least, that's the objective of Mars One, a nonprofit organization that wants to send four people to Mars in 2024 and subsequent groups thereafter.

But who would be willing to undertake such a dangerous mission - one that would likely mean never again returning to Earth? Over 200,000 people, apparently, because that was the number of applications Mars One received. The team initially narrowed down the number of potential applicants to 1,058 individuals and have now further narrowed that number down to 705 candidates, who are said to have dropped out for personal or medical reasons. The remaining candidates will be interviewed by a selection committee.

One such candidate is Dr. Leila Zucker, who has been married for 21 years. Her husband doesn't want her to go, she said, but he supports her following her dreams. "Both of us are space enthusiasts," she said. "Humanity needs to expand off Earth if we expect the human race to succeed in any way beyond just basic survival." Zucker also said that if she is selected to go to Mars, she will likely offer her husband a divorce, but will continue wearing her wedding ring regardarless.

Candidate Dan Carey has a wife and two college-age children. "She's concerned that she's going to have to watch me die on television," he said of his wife, who is not pleased about her husband's decision.

Sachin Desai and his wife Ankita Ritwik applied together. While he is aware that the trip might challenge their marriage, he said that enough marriages are strained on Earth, and he could not go to Mars without his wife.