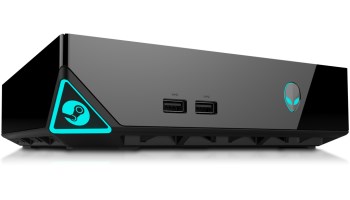 But that doesn't mean Alienware and Dell won't sell a butt-ton of them.

The rise of the Steam Machines quickly approaches!

All those Steam-powerered PCs we got a glimpse of back at CES? They're coming later this year, including the small little Alienware PC That Could.

Alienware's Steam Machine, which is expected to be priced at the same level as the Xbox One and PS4, will 'absolutely be the least profitable system we ever sell," according to Alienware GM Frank Azor.

It's not hard to make a case for razor-thin profit margins in this scenario. The Alienware Steam Machine is going to be a custom piece of hardware, based solely on its diminutive size. And getting to a presumed $499 price point means hardware profits could be in the single-digit dollar range, depending on sources and horsepower.

On the other hand, a Steam Machine without the pay-for-license Windows means money sent to Microsoft is now money saved, which should help cushion the blow. When combined with a sales volume Alienware could see with a $500 machine (as opposed to something twice as costly), and a yearly refresh cycle, you can see how Dell is going to make money in the end.