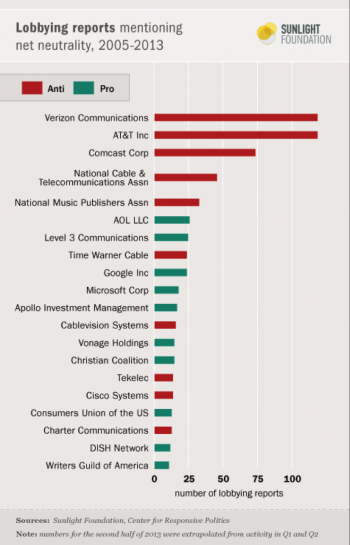 Could AOL be the unlikely savior of net neutrality?

Net neutrality, IE: keeping the internet fast, robust and open to all, is an important issue to anyone who uses the internet (IE: you, reading this article right now). Most people know that Google, having the biggest tech lobby in Washington aside from the big internet service providers, is constantly fighting to keep the net neutral, but now it seems that another unlikely champion of net neutrality has arisen. America Online (AOL), the company best known for giving the world dial-up internet in the '90s and being one of the country's largest ISPs - has outspent Google on net neutrality issues.

The daily dot has gathered a whole bunch of net neutrality lobbying data from the Sunlight Foundation, and aside from AOL's valiant pro-net neutrality effort, the overwhelming amount of reports being thrown in are anti-net neutrality, from big telecommunications corporations like AT&T and Verizon. You can check out this chart to the right.

Other corporations ranking on the pro-net neutrality list include Microsoft, Level 3 and the Writer's Guild of America. Apple, who would stand to lose quite a lot in regards to media streaming regulations, is no-where on the list, either pro or anti.

Needless to say, the numbers make it plainly apparent that AOL, Google, and others will need help in steering this conversation.