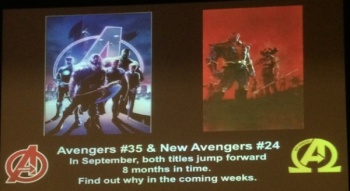 Marvel's Avengers books are jumping ahead eight months in time for an event bearing some similarities to DC's universal shake-ups.

Although Marvel Comics plays down the effects of aging, its characters have been part of a mostly continuous universe since its creation in the 1960s. It's a major distinguishing factor from competitors at DC Comics, who tend to reboot the universe and tells some new origin stories every few years. So far the arrangement has worked well, but according to the rumor mill Marvel might be setting up a very similar redesign. Heralded by various reality-breaking shenanigans within Jonathan Hickman's Avengers books, Marvel's Time Runs Out event will shake-up the entire company in May 2015. The exact nature of the change remains to be seen, but the similarities with DC's New 52 means that a reboot could very well be in the cards.

Jonathan Hickman's run on Avengers and New Avengers introduced alternate realities threatening to break into the Marvel Universe, raising the possibility that one world might need to end so another could survive. In DC Comics, these kind of events are guaranteed to at least alter the backstory of a few heroes if not an entire canon. Crisis on Infinite Earths, for example, merged countless realities into a single timeline, while Flashpoint's time-traveling premise gave birth to the New 52 universe.

At the Diamond's Retailer Summit in Las Vegas, Marvel teased that this storyline would come to a head in Avengers #35 and New Avengers #24 when both books jump forward in time by eight months. It's probably worth noting that DC is gearing up for its Five Years Later event in September, which is itself expected to impact stories in the current DCU timeline. With all the similarities, retailers are wondering whether Marvel intends to just give in and reboot, but we'll probably have to wait a real-time year before finding out what's planned.

Personally, I'm not certain a Marvel reboot is being planned, but it wouldn't exactly surprise me either. There are a lot of inherent problems when maintaining a massive continuity across hundreds of books, making it far easier to simply retell origin stories or dabble in parallel universes. That being said, breaking the core continuity now would be a bold move requiring the utmost of care, especially since similar reboots turned out to be problematic at best.

But since we're at the rumor stage and rampant speculation isn't going to make a difference, let's just pretend that Time Runs Out is building to a merging of the Marvel and Star Wars universes. Make it happen, Disney.