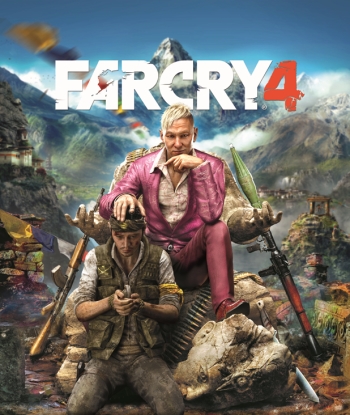 While some people raised concerns over Far Cry 4's box art, the creative director says the character featured in the center of the image is not the player.

When Far Cry 4 was announced along with a promotional image of the box art, some people voiced concerns over the image and whether it was racist. Far Cry 4 creative director Alex Hutchinson revealed two details concerning the art, which depicts a lighter-skinned man sitting on the remains of a statue with his hand on the head of a kneeling darker-skinned man.

"Just so it's clear for those jumping to conclusions: He's not white and that's not the player," Hutchinson wrote on Twitter as a response to a GamesIndustry.biz article about the controversial art and how it appears out of context.

Concerns over the image being racist in part lay in the depiction of the lighter-skinned character. He is framed to be in the middle of the image, smirking, and in power over the darker-skinned character. Previously, Far Cry 3, which features a white protagonist, has been criticized as racist. In response lead writer Jeffrey Yohalem called the game "a subversion of any kinds of racist stereotypes."

A Far Cry 4 preorder screen leaked a brief synopsis of the game's plot. The details indicate the player will assume the role of Ajay Ghale, who has traveled to a country named Kyrat in the Himalayas and is caught up in a civil war to overthrow an oppressive dictator.