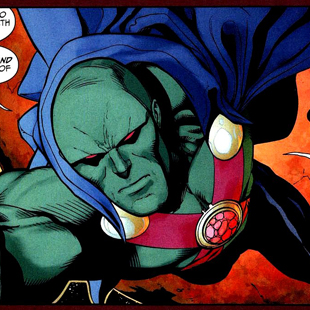 Here's one more example of how wrong things can go with DC's movie universe.

We've all had a bit of fun at the expense of Batman v. Superman: Dawn of Justice this morning, but joking aside it's worth asking how such a formless, generic title ended up being selected. Probably for the same reason that by and large, the DC-based movies really aren't as good as the Marvel Cinematic Universe: Warner Bros. and DC seem to hire people who kind of hate comic books to make their comic book movies.

Case in point, David Goyer, screenwriter of The Dark Knight trilogy and both Man of Steel and the upcoming Batman v. Marbury v. Madison, which makes him essentially the boss of bosses for the DC Cinematic Universe. Last night he appeared on the Scriptnotes podcast, along with Andrea Berloff, Christopher Markus and Stephen McFeely, and the conversation inevitably turned to Superhero movies. Goyer's astoundingly sexist comments about She-Hulk are generating the most discussion, but it's what he said when the conversation turned to DC Comics mainstay Martian Manhunter that tell us everything we need to know about precisely what is wrong with DC's attempt to clone Marvel's box office success.

Martian Manhunter, AKA J'onn J'onzz, is of course the last survivor of an ancient Martian civilization, notable for being one of the cofounders of the Justice League of America. He has not been announced to appear in the upcoming Justice League film however, and based on what Goyer said when asked about the character, it's looking like he likely won't. After first dismissing Martian Manhunter as too obscure to matter, Goyer explained how he can't see making use of the character without removing nearly everything associated with the character. I'll just let his words speak for themselves:

"He can't be fucking called the Martian Manhunter because that's goofy. He can be called Manhunter... The whole deal with Martian Manhunter is he's an alien living amongst us... So he comes down to Earth and decides, unlike Superman who already exists in the world now, that he's just going to be a homicide detective... So instead of using super-powers and mind-reading and like, oh, I could figure out if the President's lying or whatever, he just decides to disguise himself as a human homicide detective. Dare to dream!"

"I would set it up like The Day After Tomorrow. We discover one of those Earth-like planets... So maybe like... we get the DNA code from that planet and then grow him in a petri dish here... He's like in Area 51 or something and we're just basically... doing biopsies on him."

I probably don't need to tell you that Goyer is rather painfully uninformed about Martian Manhunter. Yes J'onn J'onzz assumes human form and supports himself by working as a homicide detective, but he also spends his off duty hours dressed as... Martian Manhunter, Superhero at large. Which is why he's well-known enough to be one of the JLA's charter members.

It's been said before, but Goyer almost appears to be ashamed that he's even associated with comic book films. So it is that the best he can come up with, when asked about one of DC's most interesting properties, is to delete any trace of the his origin story, misunderstand core aspects of his character, and saddle him with a genericized sobriquet so hackish it almost belongs in a Matrix sequel and plot points that reflect the worst cliches of the last 20 years.

I can't argue that Martian Manhunter isn't as well known as Superman, Batman or Wonder Woman. But using obscurity as an excuse to ignore him shows a painful lack of imagination. Marvel has made billions producing movies about ancient Norse gods and talking raccoons. Meanwhile, DC's attempt to copy Marvel is being run by someone who thinks the lone survivor of an ancient Martian civilization is too nerdy for audiences to accept. Make of that what you will.