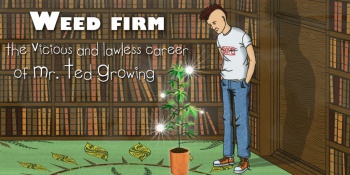 The developer of Weed Firm said Apple removed the game once it reached the top spot in all categories of the App Store.

Apple has removed Weed Firm from the App Store after it reached number one in the store. Weed Firm developer Manitoba Games stated the game's removal was "entirely Apple's decision."

Players grow and sell weed in Weed Firm, a subject that Apple is more likely to have problems with. However, many other apps containing the word "Weed" in the title are still available on the App Store. For example, Weed Tycoon and Weed Farmer are both games about growing marijuana, but these two games and many other apps are still live on the store. The difference is that Weed Firm became popular in the store. This is why Manitoba Games believes Weed Firm has been singled out.

"We guess the problem was that the game was just too good and got to number one in All Categories, since there are certainly a great number of weed-based apps still available, as well as games promoting other so-called 'illegal activities' such as shooting people, crashing cars, and throwing birds at buildings," Manitoba Games states on its website.

The developer plans to get Weed Firm back onto the App Store, but it expects the iOS version of the game will need to be censored to comply with Apple. The game is also no longer available on the Google Play Store, but Manitoba Games stated this was due to a problem with the publisher rather than the game itself. Weed Firm will have a high maturity rating to discourage children from playing.

"We do not want kids playing Weed Firm, but we firmly believe that adults should have a choice to do whatever the hell they want as long as they are not hurting anybody in the process," Manitoba Games wrote.