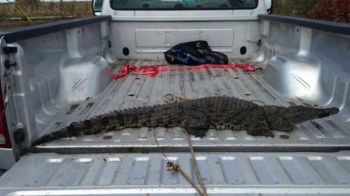 Wildlife experts are stumped by the appearance of a West African crocodile in Flordia, because apparently they never watched Lake Placid.

In 1999, Bill Pullman and Bridget Fonda starred in Lake Placid, a movie about a giant crocodile eating humans and wreaking havoc in Maine. It wasn't an especially great movie, but as a goofy monster flick it's an absolute blast, worth watching for Betty White's croc-feeding performance alone.

Another reason to give it a look is that Lake Placid is now somewhat prophetic. Viewers eventually learn that the creature wasn't an American crocodile, but an Asian species that mysteriously appeared in Maine. 15 years later, real-world wildlife officials are scratching their heads after discovering an African crocodile making itself at home in the Florida Everglades. While this crocodile isn't nearly as large as its Lake Placid or Asian counterparts, the appearance is just as mysterious. DNA testing proves it didn't escape from a breeder, and experts even suspect that another is lurking in the area... and Bill Pullman might not have his grenade launcher this time.

"In a criminal investigation launched after its capture, the Florida Fish and Wildlife Conservation Commission took samples from 10 Nile crocodiles at a nearby breeder," an Orlando Sentinel report read. "The analysis 'does not strongly support' the conclusion they are related to the one captured in the Everglades, according to results from Hector Cruz-Lopez, an agency forensic scientist."

While the five-foot long crocodile doesn't look like a B-movie monster threat, that may only have been a matter of time. While fears that the animal was a deadly Nile crocodile proved unfounded, its growth rate was a very real concern. "The one we pulled out was chowing down on fish and had a growth rate we calculated was the fastest we ever calculated for a Nile croc," said University of Florida professor Frank Mazzotti. "Its stomach was loaded with fish. It found a place where it could be fat and happy, and that's not a good sign.

"I'd say probably there's at least one more," Mazzotti continued. "Looking into the future, whether it's a Nile croc or another species, based on our climate and the number of crocs out there, this is not going to be the last strange croc we see."

Experts are considering possibilities as to how the crocodile got there, but so far Lake Placid's "it just swam across an ocean" theory remains the most hilarious. Please feel free to offer your own suggestions in the comments!