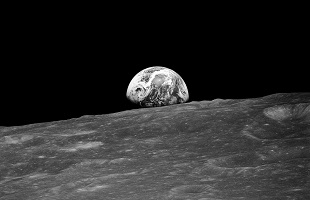 Team transmits data from the Earth to the moon at 19.44 Mbps, 4,800 times faster than the previous record.

A joint NASA-MIT research team has successfully transmitted data from the Earth to the Moon at a speed of 19.44 Mbps. An exponential leap over the previous speed record, the new uplink record is 4,800 times faster than the previous record. The team also reached a download speed of 622 Mbps.

The new system is RF-based, and the link was achieved via "four separate telescopes based at a ground terminal in New Mexico." The end hardware is a laser transmitter that sends coded pulses of infrared data to a receiver over 384,000 km away. Four telescopes are used to ensure a steady connection; between the distance separating the Earth and moon, and the variables presented by Earth's atmosphere, one of the four telescopes will typically maintain a connection.

The transmitted signal starts at 40 Watts, but it ends as a "billionth of a Watt" signal when it gets to the moon.

The tech could eventually be used to maintain data connections with Mars, allowing for larger data transfers, and perhaps even HD video transmissions.

The team will be doing a full presentation of its findings at the CLEO conference in San Jose next month, but The Optical Society has a nice rundown of the achievement.