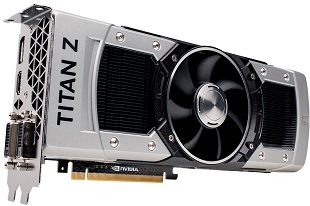 Three grand gets you a triple-slot monster with 12 GB of video memory.

Got three thousand bucks to drop on a new graphics card? Neither do I! [cue audience laugh track]

What does three grand get you? The Titan Z has two Nvidia GK110 GPUs (the same chip found in the GTX 780 Ti, and the Titan Black) paired together on one board. These fully-enabled GK110's are paired with 12 GB of 7 GHz GDDR5 memory, and 12 power phases keep the juice flowing. 5,760 double-precision-capable CUDA cores means the Titan Z is just at home doing non-gaming computational tasks as it is powering your 4K display as you play games at 2160p.

With a 375 TDP, the Titan Z will draw power through a PCI Express slot, as well as two 8-pin power connectors.

While Nvidia packs an incredible amount of power into one air-cooled video card enclosure, there are a few oddities with the Titan Z. For starters, the Titan Z has -- along with dual DVI connectors and DisplayPort -- an HDMI connector. If the Titan Z is made with 4K gaming in mind, why bother to include an HDMI port? HDMI 1.4 doesn't support 4K resolutions at 60 Hz, but DisplayPort does. Nvidia should have ditched HDMI altogether, and included a second DisplayPort connector. Because what's better than one 4K display? Two 4K diaplays.

The other oddity is price-performance. The Titan Z is essentially two Titan Black GPUs fused together, but there's a considerable price premium for the space savings. Two Titan Black GPUs would run you $2,200-$2,400, so $3,000 is a bit of a premium. The Titan Z will be a more power efficient solution, without a doubt, but if efficiency doesn't concern you as much as horsepower, you should look into a Titan Black SLI setup instead.