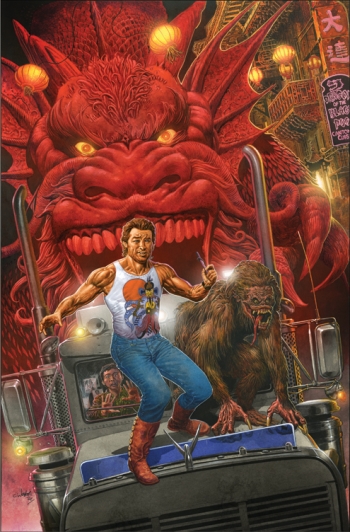 BOOM! Studios' comic set in the world of the '80s cult film starts its run with a stack of alternate covers.

John Carpenter's 1986 cult hit Big Trouble in Little China is getting new life in comic books. BOOM! Studios' new comic series is the first new story set in the world of the fantasy martial arts comedy. The Big Trouble in Little China comic was announced February 28 at this year's ComicsPRO Annual Membership Meeting. Carpenter himself is participating in the project, as a co-writer with Eric Powell. Powell is best known for his original series The Goon. Artist Brian Churilla (The Sixth Gun: Sons of The Gun) joins Powell and Carpenter on the book. The first issue of the new series will have fourteen variant covers, including retailer exclusives. The variants include work by Joe Quinones, Chris Weston, Terry Dodson, and Frank Cho. Bleeding Cool reports that the new series is one of BOOM! Studios' biggest launches this year, with over 23,000 copies ordered. The first issue hits stands June 4.

Truck driver Jack Burton, played by Kurt Russell in the film, appears on many of the covers in his iconic jeans and sleeveless shirt, topped with '80s hair. Also featured in several covers is David Lo Pan, the evil sorcerer played by James Hong in Big Trouble in Little China. The film hinted at the possibility of a sequel when one of Lo Pan's monsters stows away in Burton's truck in the final scene. The comic picks up where the movie ended, with Burton discovering the monster in his rig. Soon, evil forces invade his best friend Wang's wedding, seeking revenge. What would ol' Jack Burton say at a time like this?