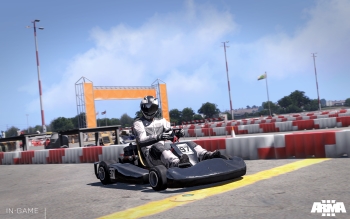 Bohemia Interactive explains how its approach to DLC will prevent a split in the player-base.

Bohemia Interactive has a new strategy for Arma 3 DLC, and to test it the developer has released Arma 3 Karts, the go-karting DLC originally announced as an April Fools' joke. Arma 3 Karts is the first paid DLC for Arma 3, and it adds a 20hp 4-stroke engine go-kart in a variety of colors, kart-racing time trials, playable race driver characters, and new objects for building racetracks. Bohemia Interactive's strategy for paid DLC is to prevent splits in the player-base by making all downloadable content available to all Arma 3 players, with reasonable restrictions on those players who have not purchased the content. The strategy aims to allow players who do not own the latest DLC to continue to play with those who do own it, and to give players a chance to try the content, to some extent, before buying it. The Arma 3 development blog discusses how the strategy also makes developing new DLC easier for the development team.

Project lead Joris-Jan van 't Land says, "A key component of our new approach is the idea that, while new content is paid, new features are entirely free. This enables us to grow the platform with significant new gameplay updates for everyone who owns Arma 3, while offering up great extra content for those players who want to experience it and support our ongoing development." Players will be able to purchase the DLC in-game, immediately unlocking the content without requiring an additional download. As the first paid DLC is also meant to be a fun test for the DLC strategy, part of the proceeds from the sales of Arma 3 Karts will be donated to the Czech Red Cross. The Arma 3 Karts is now available for $1.99. The upcoming Arma 3 Helicopters and Arma 3 Marksmen DLC will be sold separately for $15.99 each. Players can purchase all three can purchase the Arma 3 DLC Bundle for $24.99.

Previous DLC for Arma 3 included the free story campaign and the Zeus DLC, which allows one player to taken on the role of Game Master and create objectives, enemies, and manipulate the battlefield for other players. Arma 3 is available for PC.