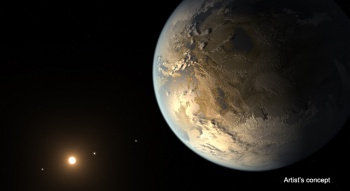 The Search for Extraterrestrial Intelligence believes that advancing technologies will resolve the Fermi Paradox within our lifetimes.

As we've previously discussed, there's lots of evidence suggesting the universe is filled with life but at the same time good luck trying to find it. We don't seem any closer to resolving the Fermi paradox than we were 60 years ago, but the Search for Extraterrestrial Intelligence thinks we might be very close. At a House Committee on Science, Space and Technology hearing last week, senior SETI astronomer Seth Shostak predicted that if technology advances as expected, we should know exactly where alien life can be found within the next 20 years.

"It's unproven whether there is any life beyond Earth," Shostak said. "I think that situation is going to change within everyone's lifetime in this room."

Shostak explained that there are three ways scientists seek out alien life. The first is to directly look for signs of microbial life, which is underway with projects on Mars and Europa. The second is to study the atmosphere of distant planets for gases like methane or oxygen, both of which are produced by biological life. The final method, one that SETI pioneered, is to seek out broadcast signals on a wide range of spectrums.

The problem with each of these methods, the third in particular, is that examinations are being conducted very slowly. Shostak noted that statistically speaking, we'd need to examine a few million star systems for a reasonable chance of success. To date, SETI has only studied 1% of these systems, but technological advances will allow it examine more. Advanced telescopes and faster computer processing power would allow SETI to make enough progress to follow-up with each system by 2034. "Given predicted advances in technology, looking at a few million star systems can be done in the next 20 years," Shostak said.

Of course, such advances require funding, which is the entire reason this hearing was being held. SETI only houses 24 full-time scientists, and its two primary telescopes are being subjected to budget cuts.

Do you think SETI could uncover evidence of alien life by 2034? Or do you suspect that, funding or no funding, the Fermi Paradox simply won't be resolved this way?