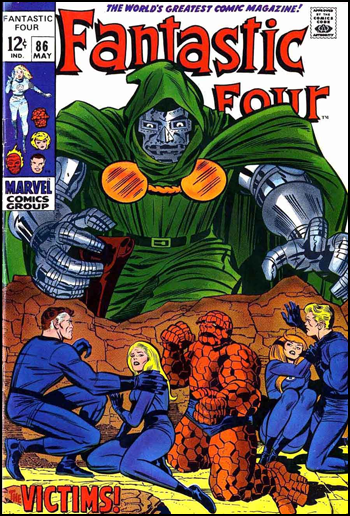 Sometimes the business really is this bizarre

The movie business? Strange. The comics business? Insane. Putting them together? Predictable.

Comic book news and rumor site Bleeding Cool has been running a series of increasingly incendiary (as funnybook gossip goes) reports about artists involved with the merchandising and promotion of Marvel Comics properties being told not to make use of characters associated with the Fantastic Four franchise, particularly in regard to Marvel's upcoming 75th Anniversary-branded promotions. That sounds strange, given that FF is the company's (symbolic) foundation, but not as strange as the reason Bleeding Cool claims to have sniffed out for the absence: That Marvel is planning to cancel all Fantastic Four books so they won't help promote the series upcoming movie reboot from Fox.

It's a pretty incredible proposition, but not devoid of plausibility - and now it's being backed up by the usually reliable Comic Book Resources. More anonymous sources being quoted elsewhere are heavily implying that, if true, the edict is likely coming from the very top: Marvel CEO Ike Perlmutter, infamous in business circles for his eccentric (and often highly-personal) decision making.

Fox and Marvel are famously unfriendly, stemming from unhappy dealings surrounding the X-Men and Fantastic Four movie rights, which both Marvel Studios' creative and business departments would like to recclaim but Fox can hold onto for as long as they keep making movies owing to lopsided contracts signed back when Marvel was in bankruptcy. In the past, it's been heavily whispered that Marvel ordered writers to stop inventing new Mutants in order to keep potential new X-Men characters away from Fox who, in turn, are believed by some to have replaced the character Juggernaut with Quicksilver in X-Men: Days of Future Past specifically to make things difficult for Marvel/Disney when a different version of the character appears in Avengers: Age of Ultron.

Complicating matters further, Marvel is currently building toward a (supposedly) major crossover event called "Time Runs Out" in 2015 that some are speculating will lead to a "reboot" of the entire Marvel Universe (and/or a merger with the "Ultimate" Universe) similar to DC's "New 52" initiative. If so, an early ending for series like Fantastic Four (which doesn't sell especially well as a comic, while X-Men does) could also be part of the lead-in for that.

Marvel has not issued an official denial.