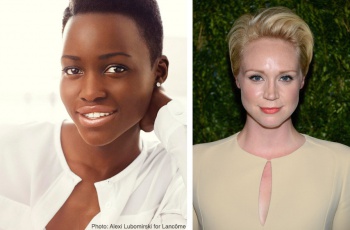 Gwendoline Christie plays the honorable Brienne of Tarth in Game of Thrones. Christie will also be in next year's The Hunger Games: Mockingjay - Part 2 as Lyme.

Lupita Nyong'o earned her Academy Award for Best Supporting Actress in 12 Years a Slave as Patsey, her breakout role, making her the first Kenyan to win an Oscar.

"I could not be more excited about Lupita and Gwendoline joining the cast of Star Wars Episode VII," Lucasfilm president Kathleen Kennedy said. "It's thrilling to see this extraordinarily talented ensemble taking shape."

Some of the primary criticism for Star Wars Episode VII came from the lack of women in the movie. With Nyong'o and Christie joining the cast, the total of women playing characters in the new Star Wars is four. That's still only four to the men's 11, but it's progress.