It's an unfortunate bit of timidity by the Gray Lady, though not necessarily the scandal it appears to be.

Newspaper cartoonists often have to contend with touchy editors when it comes to discussing controversial topics; avoiding angry readers who might stop purchasing newspapers as a result of being offended is one of an Editor's jobs, after all. So it's nothing new when a paper passes on a submitted cartoon.

Even so, political comics have always been a bit different from the daily variety, with controversy often being the point. That's even more true when you consider the vast difference between the newspaper-style cartoonists pre-Internet and post-Internet. Many cartoonists today cut their teeth online, where courting controversy - even outright trolling - is as vital to generating interest and discussion of one's work as being actually good at said work. Which is why it's somewhat surprising when a paper declines to publish a political cartoon, as was the case yesterday when the New York Times kiboshed the weekly installment of See Something, Say Something.

Here's what artist and co-creator Michael Kupperberg had to say about it on his blog:

Some of you may have noticed that David Rees and I have been producing a comic for the New York Times Week in Review section called "See Something, Say Something" every other Sunday... but we're not in today's paper. That's because they objected to David's script this week and refused to consider printing it... the subject matter (male rage, online bullying & the hashtag #yesallwomen) was "too sensitive."

I disagree very strongly with that decision, because I feel David was making a point that deserves to be made. So I went ahead and completed the script as written; here it is, see for yourselves.

Here's the comic that caused such a fuss. 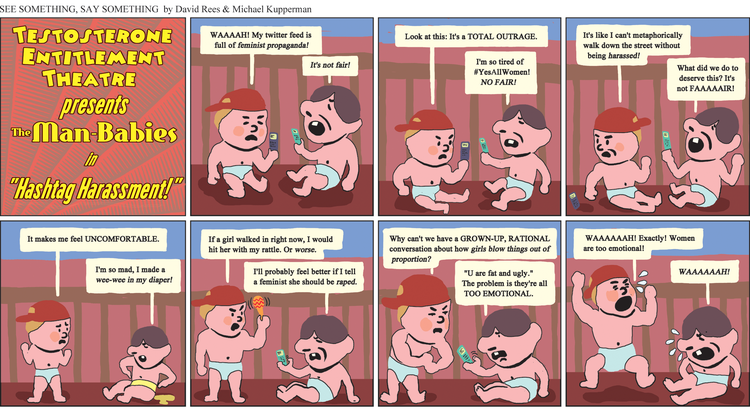 A little context: In the aftermath of the University of California Santa Barbara shootings, it was revealed that the shooter held deep-seated, vicious resentment against women who, he said again and again, deserved death for sexually rejecting him. Thousands of women tweeted the hashtag #yesallwomen, along with examples from their own lives in which they've been sexually harassed or assaulted by men espousing views similar to those expressed by the UCSB shooter. The point being that all women have stories like this.

As hashtag campaigns go, it's hardly offensive, though a sizable group of people have missed the point, adding their own hashtags mocking or criticizing the original campaign. Obviously, this comic takes a rather aggressive stance toward people complaining about #yesallwomen, but is it really "too sensitive"? Maybe, but I don't think so. It sounds like the NYT simply wants to prevent the inevitable storm of trolling and counter-trolling in comments and letters to the editor. That's disappointing, at least in the sense that a newspaper should be willing to wade into controversial topic.

On the other hand, I have to be honest: I think this comic is way too on the nose to make a decent point about male rage or the weird resentment of #yesallwomen, and it relies too heavily on Internet shibboleths for the joke to work. That sucks to say, because I'm a huge fan of David Rees' Get Your War On, but it's true.