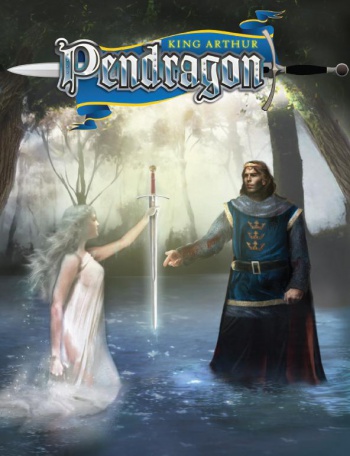 Bundle of Holding's Pendragon deal lets players lead their characters (and eventually their children) across the rise and fall of Arthurian England.

Bundle of Holding has put out some impressive tabletop game sets in recent months, whether you enjoy supernatural Westerns, magic-inspired nanotechnology, or good old fashioned pulp horror. Now the website is returning to fantasy with a critically-acclaimed classic: Greg Stafford's King Arthur Pengdragon.

Perhaps you've never heard of or followed Pendragon, as I know I certainly hadn't. Upon asking our own Jon Bolding, he described it as "The Velvet Underground of RPGs" and "fifteen years ahead of its time" before promptly falling to the ground in a paroxysm of garbled Arthurian English. Starting with a single knight during the reign of Uther Pendragon, players roleplay their character's entire life, at which point control switches to one of their children. These children and grandchildren continue the legacy of their parents across an 85-year campaign, charting the birth, rise, and fall of the legendary King Arthur. Along the way, players manage their fiefdoms, take part in tournaments, pursue romantic relationships, experience Arthurian magic, and defend the realm from enemy threats. You can even join the Knights of the Round Table to seek the Holy Grail, or fight off entire armies using Pendragon's mass warfare rules.

Bundle of Holding's Pendragon set includes everything to run its title campaign, along with other helpful resources. The featured King Arthur Pendragon core book is the latest edition, letting you run knights, maidens, or maiden knights for your campaign. Book of Knights and Ladies is an advanced player's guide for designing characters from any location in Britain, if not one of ten foreign kingdoms. If stats aren't your strong suit, Book of Records Volume 1: Knights offers auto-calculating PDF character sheets for use at any point in the campaign.

On the Game Master front, The Great Pendragon Campaign charts out the entire 85-year campaign, complete with 100 adventures, NPCs, Faerie creatures, and extensive maps. Book of Armies details every single army featured in the campaign, such as Roman Imperials, Britons, Saxons, Irish, and many more. Those armies will be especially useful with Book of Battles, which expands Pendragon's rules with mass combat and extended melee engagements.

All I know for certain is this: I'm incredibly tempted to switch my current tabletop campaign for Pendragon. And given the impressive Bundle of Holdings we've seen lately that's no small feat. The King Arthur Pendragon Bundle of Holding runs until June 9, 2014.