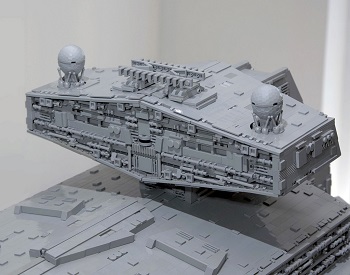 When you look at the original Star Wars films, it's often hard to see the Empire as anything less than bumbling. Seriously, think back on the Imperial Warmachine and try to envision a single moment not involving Darth Vader where the Empire seemed to be on the ball. I'll bet you ten Republic credits that the first thing that comes to mind is inaccurate stormtroopers, faulty battle stations and giant metal chicken walkers destroyed by teddy bears.

That said, you do have to give credit where it's due and if there's one thing the Empire does right, it's building really cool starships. Case in point, the Imperial Star Destroyer. Equal parts rugged and imposing, it's a symbol of the Empire's power that's both iconic and immediately recognizable. So, of course, someone had to make a LEGO brick version of it.

That someone would be Flickr user Jerac. A native of Poland, he recently completed work on a custom Star Destroyer that's been nearly six months in the making. The end result is a beastly build measuring more than six feet in length, nearly two feet in height and containing a whopping 40,000 individual LEGO bricks. As insane as the sheer size of Jerac's build is however, the real wow factor starts to set in when you look at close up pictures and realize just how finely detailed it is. It's so spot on that it's easy, at first glance, to not even notice that you're looking at something made from thousands of tiny LEGO bricks.

This, of course, isn't the first LEGO brick Star Destroyer in the world. LEGO itself has produced some nice sets in the past. As nifty as those are though, we're going to go ahead and give the Star Destroyer prize to Jerac whose build pretty much kills the official products in every conceivable way. Take a look at it and let us know what you think.