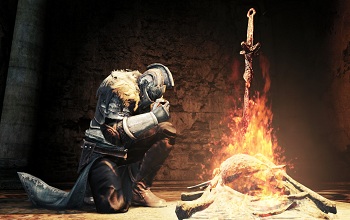 This week, Lindsey Weedston examines the need to explicitly name mental illness, rather than sidestepping or leaving ambiguous issues of mental illness in games. Weedston writes:

Being able to speak frankly about psychological disorders and their symptoms is the key to ending stigma, and it helps the people affected tremendously through the simple function of letting them know that these issues are not uncommon and they're not bad people for having them.

Elsewhere, Merritt Kopas suggests that Saints Row IV, which doesn't make relationships a narrative end-game or quest achievement, provides an environment in which to "dismantle a heteronormative romance culture."

Over at Kill Screen, Jordan Smith uses Dark Souls 2 to introduce the philosophies of Kierkegaard, one of existentialism's finest. This one contains spoilers, so beware.

Next, over on Gamasutra, the prolific Ian Bogost argues that,"The Spiny Shell is the most profoundly existentialist element of the Mario canon."

Finally, Monica Kim has an interesting article up at Modern Farmeron the politics of the belly in the Pokemon universe. As she puts it: "The ethical dilemma is complicated by the fact that each species can be a beloved friend of fighter, or it can be a delicious meal."