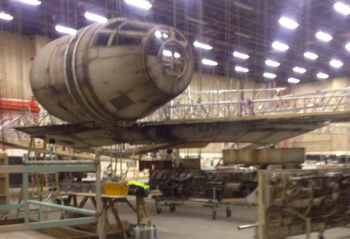 With Han Solo expected to be a major character in the first film of the Star Wars sequel trilogy, it is not surprising to learn that the Millennium Falcon, his iconic ship, will also make an appearance. TMZ obtained photos from a location where set pieces and props are constructed that reveal the Falcon and an X-wing mid-way through completion. Once again, photos like this prove that J.J. Abrams Star Wars Episode VII will not be as CG heavy as many fans feared.

More photos revealed earlier this week showed off more physical props and animatronic creatures in a desert that is most likely the set for Tatooine. The Star Wars VII news this week also revealed the addition of Gwendoline Christie and Lupita Nyong'o to the cast. Reactions to leaked photos and cast additions have been positive, even while adding to the hype machine Bob "MovieBob" Chipman criticized last month.

Like many Star Wars fans, I adore the Millennium Falcon. Even though its inclusion is not a huge surprise, it's oddly comforting to know the ship that made the Kessel Run in less than twelve parsecs will be present in at least one film of the sequel trilogy.